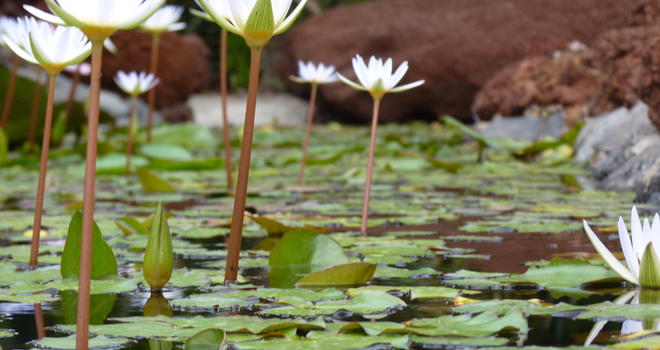 A few weeks ago we told you about the semi-aquatic plants growing on the banks of rivers and ponds.
But, there are others that grow in water, either completely submerged, with the leaves flush with the surface or rising above it. Some root in the background, while others float freely. Among the growing submerged, there are some that complete their life cycle underwater, ie, flower and fruit under water; in others, only the flowers poke above the water and there are pollinated by insects.
Hundreds of species between vascular plants (flowering plants and ferns) who have chosen the aquatic habitat are known; if we add the unicellular and multicellular algae, thousands. Here we can deal only vascular plants, sometimes called "higher plants" as opposed to algae, which are less developed and have sap conducting vessels.
Most of them live in fresh or brackish water, but also vascular plants with flowers in the sea. The Canarian "Sheba" (Cymodocea nodosa), which is so important for marine life sebadales in sandy bottoms, is one of these marine plants, although many people think is a seaweed, has nothing to do with them.
Surely, the best known aquatic plants are water lilies. They are valued primarily for their beauty, but also have several medical applications. Used for example to relax the nerves and to treat abscesses and other skin problems.
Lilies are called to a group of plants of various botanical genera, mainly Nymphaea. In this genre there are several dozens of species, distributed worldwide, but no native species in the Canaries, no doubt by the lack of suitable habitat, and neither has so far found no naturalized. On the other hand, also the famous lotus (Nelumbo nucifera) and the genus Nuphar.
They are perennials with a long rhizome that grows in the mud at the bottom. The leaves are born underwater, but will grow up and finally the sheet, generally rounded, extends over the water surface, being anchored to the bottom by a long stalk. Depending on the species, the flowers are almost flush with water or soar over longer or shorter stalks.
Due to the popularity of these plants, today there is a huge number of varieties obtained by crosses and artificial selection, as in any other cultivated plant. Generally they need good quality water (low salinity) and clean, with a minimum depth of about 25 cm and a bottom of mud or mud. They can be found in full sun or partial shade trees to the riverside. The we can also grow in large pots placed under water.
Throughout this week we will present you other aquatic plants that are perhaps not as famous as the lily, but are very nice too!