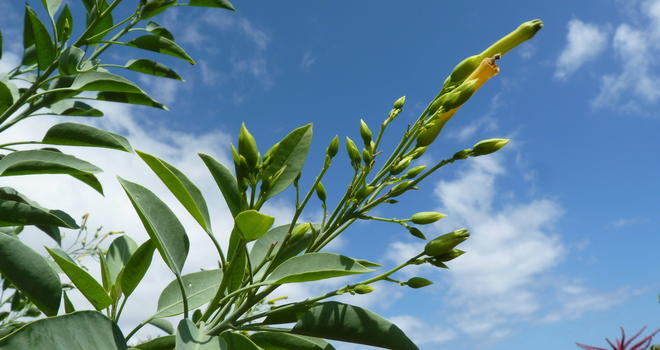 We present again this week some plants that have to be careful because of its toxicity.
But this time it’s up to those who care for gardens and parks! But the emerging spontaneously, which often call "weeds", although some of them are not "grass" in the strict sense of the word, but shrubs and even trees. There are a number of them, so we have chosen some of the most common and visible.
Some, as we will see throughout the week, are both medicinal plants, others are ancestors of edible crops, and not a few are considered ornamental plants. What they all have in common is their toxicity, although, we repeat, we do not encourage fear or rejection, but to inform. We can quietly admire their beauty, they have it, and have them in our garden if you want. But we will be informed and we can take the necessary precautions.
Mime or Moorish snuff (Nicotiana glauca) is a Solanum, more specifically of the genus Nicotiana, in which the different species of snuff are integrated. Therefore, it is a wild snuff, originating in the case of Peru and Bolivia, and was brought to the Canary Islands as an ornamental possibly around 1890.
As it is a very poisonous plant (not even think anyone use it as usual snuff), able to survive in very different environments, and produces tens of thousands of tiny seeds per individual, mime soon became an invasive plant. Today can be found in open places from the sand dunes of the coast past roadsides and urban environments up to 500 meters or more. Above this level, it seems that may already be in winter temperatures too low to the ground, so it fails.
Nor grows in forest areas, it needs lots of light. It is found in large quantities especially in highly grazed areas, where it benefits from nitrogenous fertilizer from animals and that they can’t use it as fodder because of its toxicity.
As in many cases, there are other insects that can eat the leaves of the Moorish snuff, for example caterpillars called "butterfly of death" quite low in the Canaries and flying at night. The crawler reaches the size of a finger and has blue stripes on a yellow background.
We hope you have interest and we invite you to learn some more about them along this week!