Why it is called Wild Bunny? 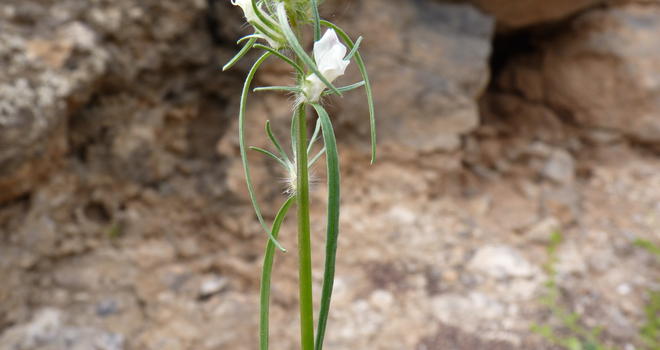 There are several species of "bunnies" or "lion's mouth" or "snapdragon". So called because of the laterally pressing flowers, they open as a mouth. In "Wild Bunny" (Misopates salvagense), this is not so well perceivable, because the flowers are very small. But cultivated garden bunnies yes we can do the trick well.
Misopates salvagense was a plant, a bit enigmatic until not long ago. It seems that the first specimen was found in the Savage Islands, halfway between the Canaries and Madeira, back in 1850 or 1860. This specimen was included in a herbarium, i.e. the collection of dried plants pressed with universities and botanical gardens for study.
Almost 150 years later, an English botanist saw the plant in the herbarium, he realized it was a different kind normal Misopates and he named.But just that exemplary was known and no one knew where there was more,since then nobody returned to collect it, either in the Savage Islands, until canaries botanical they realized a few years ago that it was actually a plant well represented in several islands of the Canaries, including Fuerteventura, where it grows in many places:Badlands, mountain slopes, ravines ...
Just had passed unnoticed or been confused with other species. Sometimes, botanical mysteries are solved. But not always, and so those who are dedicated to this always have something to investigate.